Latency and Bandwidth Effects on data URIs in CSS

Today’s post is just a quick one to share some data from bandwidth and latency tests I conducted on a page using CSS embedded data URIs. For the tests I used another free template from Smashing Magazine and set up the same scenarios as last time:

In last week’s post I tested the scenarios in Firefox 3.5. This time I tested a few different browsers but the results I’m posting are for Safari 4. Note that Safari (as well as Chrome) allows a maximum of 4 connections per hostname, compared to FF’s and IE8’s 6. This means the reduction in HTTP requests should produce a greater performance boost in Safari/Chrome. 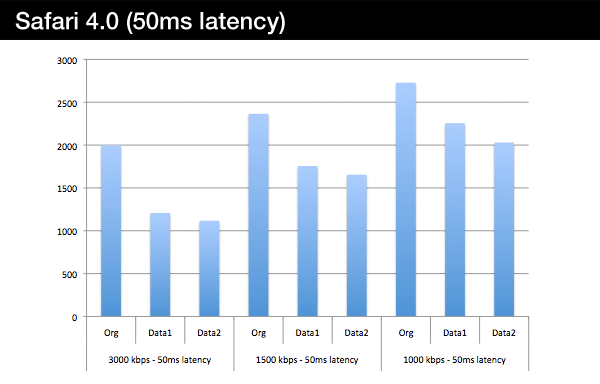 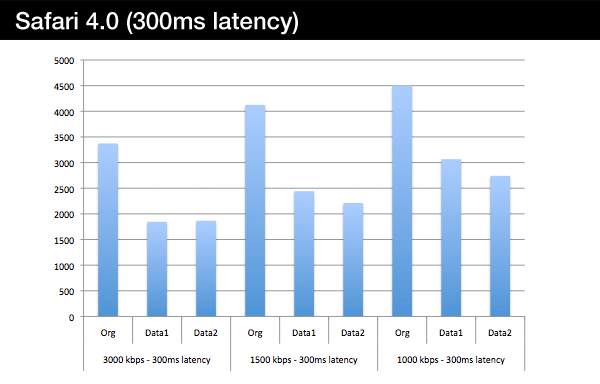 We see that the data URI pages perform better than the original in all cases.  And in all cases data URI #2 performs as well as or better than data URI #1.  We can also see that latency conditions play a greater role than bandwidth conditions in determining the performance benefits of the data URI scenarios.  Given that using data URIs is a means to achieving fewer HTTP requests, this is not at all surprising.

Note how well the data URI scenarios performed at 3000 kbps.  At both latency levels we got a load time reduction of almost 50%.

It’s not a performance party without some gratuitous waterfall action. 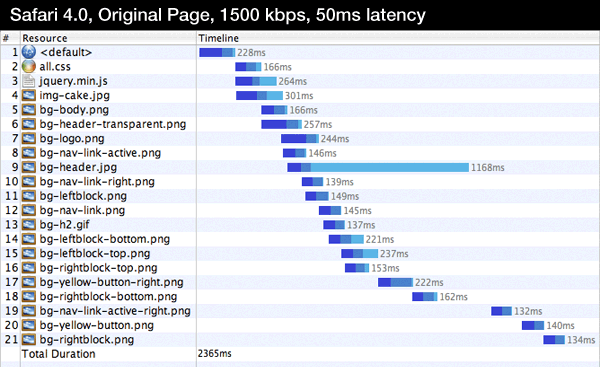 The key difference between data URI #1 and data URI #2 is that in the latter the large image downloads in parallel with the data URI stylesheet.

If you want to experiment with the pages yourself, you can download a zip of the 3 versions here.

A look at IE8, maybe mobile, a review of the options for dealing with IE6/7, and soon an attempt to sculpt all of this into some conclusions and best practices.

Thanks for interesting research!